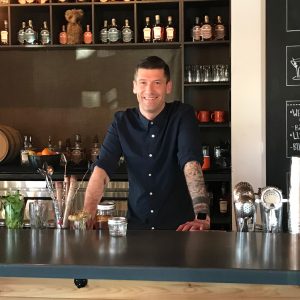 On April 1st, Stuart Hickman began his first day at Mammoth Distilling as our new Hospitality Manager. Stuart was brought on board to be responsible for all front-of-house and customer-service operations in both our Traverse City and Central Lake tasting rooms, as well as at our Central Lake production campus. Basically, we hired Stuart to make sure everyone who comes through our door has an exceptional and welcoming experience, and we’re quite sure he’s the perfect person for the job.

He comes to Mammoth as a ten-year veteran of Stella Trattoria, one of the most prominent fine-dining establishments in Traverse City. While at Stella, Stuart helped to craft and deliver their reputation for making every customer feel special and well looked after, and we’re excited for him to bring that experience to our team at Mammoth. Reflecting on his new role here, Stuart says he has been reminded of a favorite saying he often heard from his grandfather.

“Be a yardstick of quality; some people aren’t used to an environment where excellence is expected,” recalls Stuart. “In other words, strive to be the best you can be every day, and serve as an example that others look up to as a model of excellence.”

Stuart grew up in Central Lake, and is proud to say he was raised on the shores of Torch Lake. He attended college at Central Michigan University where he pursued his studies in sales and management, an education that has been significantly relevant to his career in hospitality. After living in Grand Rapids and Royal Oak, Stuart returned to Traverse City in 2007 and lives here with his wife Amber and their two daughters, ages 4 and 10.

“I lost my mother when I was young, and have always promised myself that when I had a family of my own, I would make them a high priority in my life,” Stuart shares. “So when I’m not working, I enjoy just being a dad and soaking up time being with my family. Those are the moments I cherish most.”